As I remember, he reviewed the BHK300’s and bought those as well. I wonder what kind of discount these reviewers get?
Anyway, Mr. Cordesman is a well established friend of PS Audio.

The low down on Mr. Cordesman, most impressive. 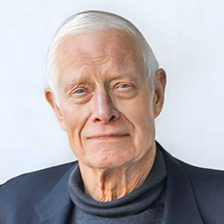 Anthony H. Cordesman is the Emeritus Chair in Strategy at the Center for Strategic and International Studies (CSIS). He has previously served in the Office of the Secretary of Defense, the National Security Council, the State Department, and the...

Wow! When can he find time to listen to music?

Must be from his home office, even in pre-corona times.

Paul mentioned a while back when they were having dinner, Tony only wanted to talk hifi. You can imagine how Paul felt. With Tony’s background, he must have some pretty amazing stories.

When he came to speak, I had no idea he was an audiophile. I genuinely wish I had.

He used to really like Thiel speakers and once owned the top of the line.

I recall he was on air giving tactical updates during the Gulf War. As many have noted - an interesting fellow.

My favorite reviewer, if only because he “hears” things the way I do.

I do wish the TAS review had noted the associated equipment, as he hasn’t contributed recently. Used to be Pass XA-160.8’s, Pass XP30, and the BHK 300’s, but no idea how his system has evolved or what was used for this evaluation.

Kind of a moot point, though. I’m headed to Boulder tomorrow to hear them for myself.

Kind of a moot point, though. I’m headed to Boulder tomorrow to hear them for myself.

Congratulations to the PS Audio team! Mr. Cordesman’s concise review and statement can be taken as “Gospel” to the transcendent design and performance of the FR30’s! Amazing!

I visited Anthony’s home in DC 20-years ago only a few weeks after 9/11 sent the nation reeling and changed our world. It was eerie when all aircraft had been grounded and the skies went quiet. America had been shocked. The look of disbelief, sadness and resolve adorned the faces of most as though in a daze.

My job was to deliver a pair of Legacy Whispers to Anthony’s flat in DC. The review commitment from the Absolute Sound and Anthony had been made months prior. Bill’s lead engineer Troy Caldwell and I drove the company truck from the Legacy plant in Springfield, IL to make the delivery and set the Whispers up.

Though I had spoken with Anthony on several occasions regarding the review and to receive delivery instructions I had not met him in person. Even 20-years ago, his reputation as an international correspondent and expert ranked him at the very top and without peer.

To this day I regard the experience and hours that I spent with Anthony to be one of the highlights of my career at Legacy. I have often wondered how with the intense demands of his “day job,” that Anthony had time to engage in the business of being an audiophile and to be a contributing writer for the Absolute Sound. I found Anthony to be an intense and incredibly brilliant person. What a pleasure it was.

Here is a link to the April/May issue and review provided by Anthony on the Whisper. He mentions the nature of 9/11 and his feelings at the time. Where did 20-years go? https://d2digq31msfd9c.cloudfront.net/uploads/anthony-cordesman-whisper-rvw.pdf?mtime=20210426151407&focal=none

If Anthony says that the FR30’s are a game changer as he did, then they are!!! Now I want a pair! Again, congratulations to the PS Audio team!!

I finally received my digital copy of TAS yesterday. -Nice glowing review!
Does anyone know Cordesman’s age? He’s been around a while.

Thanks, Bob and yes, Tony is a special human being and someone I too greatly admire. The Fr30s are a very special product. Perhaps in a class by themselves that include performance and value that goes beyond anyone’s expectations. I am truly honored to work with such gifted people as Chris Brunhaver, Darren Myers, and Bob Stadtherr.

Anthony H. Cordesman (born August 1, 1939) holds the Arleigh A. Burke Chair in Strategy at the Center for Strategic and International Studies (CSIS) and is a national security analyst on a number of global conflicts.

Thanks for that Cordesman bio, Bob. I would take one exception the FR30 review, however, which actually lends itself to your product offering. This is not a negative. I really can’t find any fault with the FR30’s. Only a better room would improve them. PSA and A.C. say there is no inherent advantage in bi-wiring, and I agree with that stance. But, there is and advantage to bi-wiring the speaker with Iconoclast.
I have Series II TPC on the mid/tweeter top box and Series I SPTPC on the bass cabinet, powered by mono BHK 600’s. Running just a single version of each cable full range does not yield as good a result. This lines up with Galen’s design intent on making a new cable that shines on all but the lower frequencies. I have best of both worlds for now and look forward to hearing the Series II SPTPC, provided the silver version does not break the bank.
Some of you might say that there are even better speaker cables that would run the FR30’s full range.
Maybe something in the Stealth or Dragon stratosphere. But that is beyond my means. Contentment is relative and I like what I have for now…
I think.

Contentment is relative and I like what I have for now…
I think.

I empathize AND I sympathize!

I believe that the Series II in SPTPC will be a game changer! We shall soon know, very soon.

I think it’s great the FR30s got a good review, but I have to admit the review bothered me as it seemed AHC spent more time discussing all the things that go into good sound rather than the sound of the FR30s themselves.

Normally we’d hear how they compare to Sasha DAWs or Alexia Vs or Focals or Rockports or other similar speakers, but we didn’t really get any of that but we do get a discussion of their visual style.

It’s great he bought the review pair, but for those coming up with a short list to audition the review isn’t all that helpful at all.

Is it just me?

It definitely is a review worth talking about.

It’s a fantastic review without question, pronouncing the lack of distortion and bettering of most other characteristics compared to what he heard so far.

Leaving out comparisons is the one thing (I usually appreciate them being mentioned), leaving out more or less the usual emotional (not technical) experiences with music played is another thing. I count this as his (as a senior reviewer) tiredness of usual review prose but also as his obvious integration of Paul’s preferred story about the FR30 (references speaker after Infinity, Genesis, technical superiority of concepts reflected in sound etc.). It’s nothing I’d see as a negative. What he writes makes conclusions about the emotional side possible, while I somehow missed descriptions of a great acoustical illusion etc.

A really interesting detail is where he points to possible difficulties of room integration (possible forwardness, bass overload) while immediately denying them. That was a novelty in my history of reading reviews between the lines. Not sure if it’s a sign of a tight mental connection to PSA and Paul or the usual reviewer avoidance of anything critical.

Finally what I’d read out of this review is, that this speaker is a weapon and tool that wants to be perfectly integrated in a (better rather perfect) room and then can provide exceptional results in any category. Which is high praise for a speaker.

What I don’t read is, that it’s a “don’t think about it, plug and play it into a room, will sound magically immediately, will first convince with its musicality prior to the technical superiority” speaker. That might not have been the intention, but nothing goes without a certain effect.

I found this review to have a mixture of valuable and non valuable character.