Years after first hearing about them, the speakers arrived last week.

The photos really don’t explain how they feel in person, which is unusual in itself, since many things actually look like their photographs.

In the case of the Aspens, it all depends on where you’re standing. From the front, they seem almost whisp-like. I’ve got the Magico A5 at home (I’ll get back to that in a minute), and compared to the solidity of these, the front-view of the Aspen is pretty slender.

But move yourself about five feet to the side and you’ll see more of the speaker. A lot more. They’re way deeper than the photos give them credit for. I’m calling this out because it calls itself out–I’m getting used to it, but it’s the biggest difference.

Chris wasn’t happy to hear that I was powering them with the 12wpc Shindo Montille, but in the 18 x 25 rectangular apartment room I am using, they were magical. That’s my word, and I’m sticking to it. They don’t just tickle the speakers, they cause it to burst into hysterics, singing and dancing with an energy I didn’t expect.

I swapped in a Rogue 60wpc (in triode) tubed pre-amp and the speakers filled in a bit with even more dancing and even more singing.

This is straight-up veil-lifting. I did that hackneyed reviewer thing of digging deeper and deeper into my Roon vault, wanting to re-hear songs that I’d gotten tired of. And now I wasn’t tired of them all over again.

I helped Patricia Barber with the launch of one of her recent albums and so she was first in the rotation. Then the new Strauss recordings. Then Roxy Music, cause no one else was in the room to smirk. Then Christian McBride and what the heck, a little Magic Dick whamming and jamming.

I contemplated playing some obscure opera just so I could tell you I was cool enough to do so, but I don’t like obscure opera, so I’m not going to lie–I skipped that.

Sometimes, you want to keep turning a speaker louder and louder to let it clear its throat and sound the way it wants to. With the Aspens, I found myself happily making it softer… because my office is in an apartment and because it just kept sounding real. I could listen to Cyrille Aimee at the volume I heard her live in a jazz club, not in an over-amplified semi-simulacrum of the real thing.

Okay, back to the Magicos. The Magicos weigh a ton. Almost. I mean, you would need 8 of them to weigh a ton, but still.

And they sound like they weigh a ton. They are not speakers, they are part of the house. With the right amps, they bring clarity and presence and accuracy and truth to the music. But that foundation comes at a cost–I’ve never heard them sing. For daily listening, I’m thrilled to own them, but I find myself itching for the speakers I have in my office now.

I miss Art Dudley, and I shared my friend’s taste in amps and speakers. Before the Magicos, I had a pair of the 96 Devores with Shindos. No one ever accused them of living in the grey. When I switched, I was generally delighted with the increased presence, but I guess I missed some of the magic.

The Aspens bring that back, dramatically.

The biggest leap PS Audio has made with these speakers is embracing the fact that they are not for everyone. The amps are for anyone who has a stereo. So are the power conditioners. But the Aspens? They are for people who want a certain kind of speaker in a certain kind of room. A speaker that, like an aspen not an oak, can bring resilience and awe to whatever they’re playing.

If that’s you, you’re in for a treat.

Thanks to Chris and Paul and the team. These are groundbreaking, ear-delighting and joy filled.

And might be a little more involving than someone who just wants neutrality and accuracy prefers.

While „might be too involving vs. absolute neutrality“ can mean anything from “there’s nothing to dislike of an involving speaker” to “it has a too pronounced this or that”, I tend to understand even “possibly too involving” just positive.

A most enjoyable post! It could be the best post ever here. I really love the FR30 experience myself. I feel like getting a pair and making another system off to my left. Rotate my chair and enjoy a whole other thing. Amp choice is crucial for getting what you want out of them. Tubes seem a fine choice. I could go down this road if my lovely bride would turn a blind eye.

So no, not going there soon.

Thanks, Seth. Wow, what a review. This made my morning. Heck. It made my month!

Nice to see another FR30 owner review, especially comparing to a direct competitor.

I have the Magico A5 on order looking forward to hearing them in my space. And paying attention to the FR30, as I think FR20 is more for me. Can I ask which amp are you using for the A5? I heard them with McIntosh and thought they did pretty well. I think I know what you mean by sing, but I’ll reserve that assessment that for when I get them in my room.

Thanks, congrats on owing both of these speakers!

PS, photos please! we love those, of both setup

for the magicos, I had the BHK monoblocks, but switched to Stellars as I like them better

as for a photo, I have nothing that interesting to share. How about this instead?

Not what I was looking for but, sure lol.

Seth would you be kind enough to post a picture of the FR30s in your room? I currently own the A5s and somewhere I saw a picture of your room with the Magicos. I thought the room looked “tight” with the Magicos and now I cannot imagine the “tightness”! I agonized of getting the A5 over the FR30 because of their size. Some visual perspective would be much appreciated. Thank you. 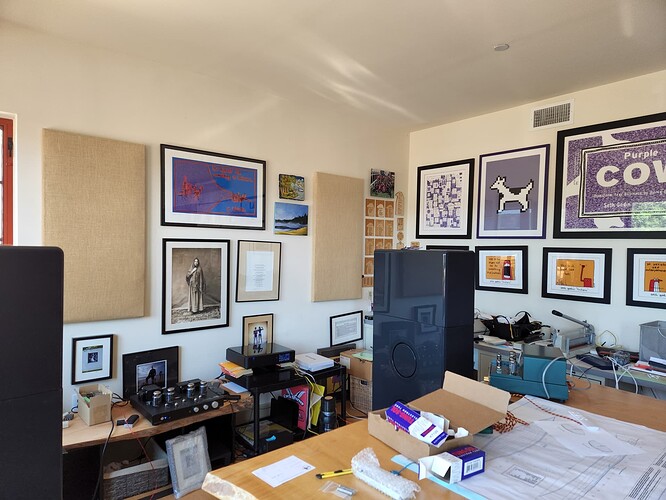 Your listening space could use a thorough redo…

You weren’t in marketing at any time? So you like them. Great review, unusual room, great canoe.