Octave Records - why only DSD64 available for purchase?

Why are Octave Records releases limited to DSD64 (SACD)?

Are they not recorded at higher DSD rates like DSD128? If so, why can’t we purchase these higher rates?

DSD64 is technically not very good - when nothing else was available it was fine but now we have higher rate recording abilities? 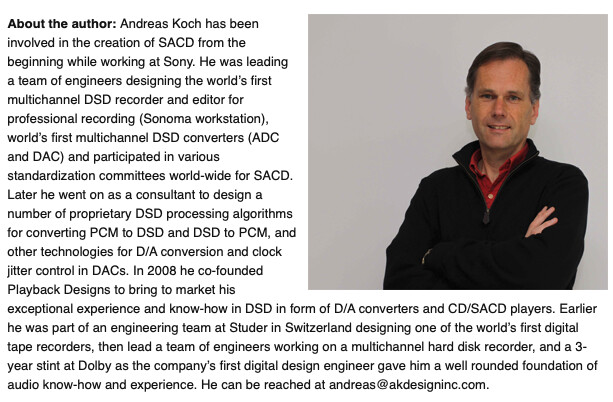 You are only looking at things at the digital side… there is also the analogue filtering required… as per his articles.

The gist of his articles is higher DSD rates like DSD128 makes analogue filtering easier (but there is a sweet spot in performance, something in between DSD128 and DSD256).

With something like an RME ADI-2 PRO FS A/D, recording in DSD128 and DSD256 is easy these days.

So if we can do technically better and it’s easy, why not?

No problems with releasing SACD discs for those that want disc but why not record at DSD128 and sell those files to those that wish to have them?

These questions are to Paul, not you…

If we only look at things in the digital domain like you have here, then there is no technical reason for @tedsmith to upsample in DS DAC higher than DSD64 rate…

There are multiple noise floors that matter here. The graph shows noise from nonlinear issues with sigma delta modulation.
That graph was produced by a averaging multiple FFTs each of which has many points (to get the desired frquency resolution.) If a million point FFT is used it will average white noise over a million bins and hence lower the apparent white noise power by 60dB. Also since multiple FFTs are averaged, white noise is also lowered by the square root of the number of FFTs that were averaged.
The purpose of these graphs is to make sure that non-white noise is clearly shown, but to get an idea about the white noise you need to know how many points were used in the FFTs and how many separate FFTs were averaged.

Double rate DSD allows moving the knee of the rise of nonwhite noise up an octave, quad rate another octave… BUT, higher sample rates are also compromised by more jitter which adds more “ugly” noise everywhere. So there is a sweet spot that depends somewhat on the other parameters of your implementation.

Which makes perfect sense. Thanks.

Does not the upsampling of the DSD avoid the increased jitter issue while at the same time taking advantage of more relaxed filtering?

These questions are to Paul, not you…

It is the risk you take when posting publicly; the public may respond.

DSD64 is technically not very good

That’s what you call “a good one” (slaps knee)

Does not the upsampling of the DSD avoid the increased jitter issue while at the same time taking advantage of more relaxed filtering?

That’s precisely why there’s a sweet spot. With the DS that sweet spot for lowest quantization noise vs. jitter noise is somewhere just above double rate and below quadrate.

Thanks, Ted. I’ll get my head wrapped around this eventually - I hope.

There are other reasons to like double or quad rate for upsampling - the more frequency room you have the more options for tailoring the noise floor or other tradeoffs. With single rate DSD the options are fairly constrained.

I’m listening to 16/44 WAV. Am I meant to have an inferiority complex?

Not at all! I think the Format thing is no longer terribly relevant in most applications, unless chasing whatever the Ultimate Current Thing is matters to you for some reason. I’m usually blissfully ignorant of what the sample and bit rate is of whatever I’m listening to. It has been a decades-long road during which that was a lot more relevant, and so it is a big relief.

I think it’s one of those “if you think it’s better than it is better” irregardless of the physical measurements one way or the other. Kind of like wires

Any chance you can share a response why only DSD64 is available for purchase?

Is it because Gus’ system is limited to DSD64 recording/mixing/mastering?

That is correct. Sonoma is only capable of DSD64 (or 1XDSD). We are working on developing a new system that can handle 4XDSD but that’s going to take some time. Some companies upsample but that’s not the pure approach we would want to take.

Sounds like things are getting closer to recording in DSD256 rates , from your latest video. Much much better than the old outdated Sonoma system at DSD64 which has lots of technical issues, as per earlier posts.

Merging and RME have had DSD256 recorders for a while now.

I assume this means DSD256 recordings will start to be available soon too?

Correct. We will start recording everything in 256 once the new studio is up and running. And yes, we will begin making them available for download when we do.

Where will this sweet spot be with the Mk II and TSS?

Roughly the sweet spot is different for each bit width, i.e. it’s different for one bit than, say five bit or sixteen bit. One bit is the most sensitive to jitter so it’s lower for one bit than other sample widths. It’s the same for the DS Mk II and the TSS as the DS. At the next level of detail I can’t really say whether lower jitter of the Mk II and TSS will do more or less to raise the sweet spot than their lower noise.