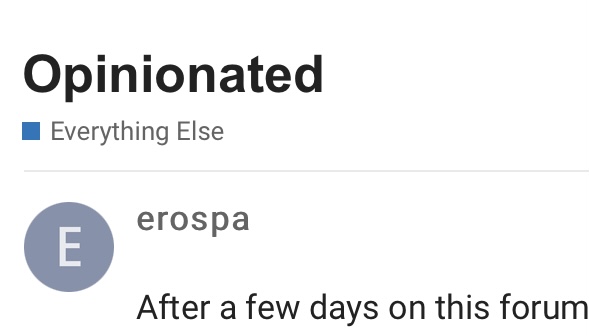 When I read his post, I was thinking I must have missed a good thread.

My wife Liz is the knitter (crochet mostly at the moment), but that hat was bought for me by a friend from (where else) Glastonbury, when I gave her a lift there, it was great for conference calls when I was working, but very itchy!
I bought BB’s autobiography when it (paperback) came out, always admired his playing, ever since being played Yes’s “Fragile” age about 15, it’s also a very interesting read about Robert Fripp

Yes. Based on my experience of variety of separates and integrated gear. Never heard that D´agostino integrated?

Maybe they could make a slogan out of that

That is ugly, though perhaps with some distressed leather and brass added it would appeal to the Steampunk brigade…

Chill … it’s Saturday night, The Voice is on TV here and you have to fill the gaps.

Given the designer’s reputation, I am sure it is a great performer.

I like the “Steampunk” look of the line as well.

That said, this piece is way off, to my taste, aesthetically.

The screen clashes with the meter, the case work of the “all-in-one” does not match the stand/power supply, etc. Just a mess…

To each his own.

[PS: Would still love to demo one in my own home…]

Seems to be a D’Agostino design…

That is ugly, though perhaps with some distressed leather and brass added it would appeal to the Steampunk brigade…

It’s no so bad in the flesh.
Off to listen to some late 70s percussion. The only time I think I ever heard him play was one of the Genesis gigs, I think Trick of the Tail, with Chester Thompson when Collins was up front, it was a long time ago. Used to go to school near the Hammersmith Odeon.

I suspect it divides opinion, but sells well in Dubai.

Maybe when Paul wrote about running away from integrated audio, he had this in mind. Then I would have agreed with him.

Oh, I’m entirely chill I assure you. Only 4-something pm here. Haven’t mentioned it prior to this despite it being a widely held opinion.

Does anyone remember OP leaving here?

Would someone post a link to the “opiniated” thread the OP got so torqued over? I’ve been looking for an excuse to leave this forum for 5 years or so. It could be my ticket outta here. lol

I am therefore leaving the forum, to continue enjoying my PS Audio products without the banal chatter of this forum.

I’m still pretty broken up about this, and it has harshed my Saturday afternoon mellow😢

If you don’t have something intelligent to say best say something opinionated or keep your mouth shut.

“Most minds are like concrete . . . all mixed up and permanently set!"

I don’t always offer unqualified drivel, but when I do it’s opinionated.

I am working on banal.

I’m of the opinion that everyone here sucks but me.

That was a joke