However the manual says it’s configurable and others for other Holo DDCs have found ALT2 dip switch setting to work with PSA. 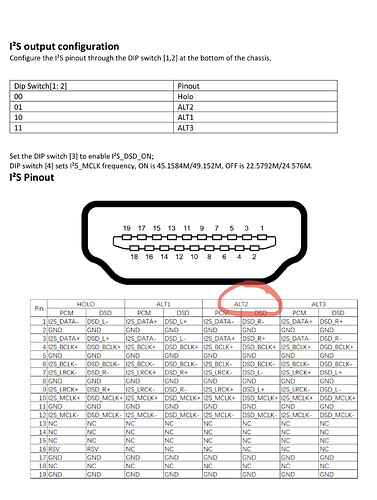 I have the Ps Audio SACD Transport going into my Holo May KTE Dac via HDMI and was told to use ALT2 setting (by the guy at KitsuneHifi) and it works perfectly.

Red USB out to what? A MKII?

He used to have a May KTE

If your comfortable in the Innuos camp then either the Pulse Mini or the Pulse are safe bets for you if you don’t need an internal DAC in that setup. With the Mini you can add an inexpensive LPS if you feel the need to as their optional power supply is expensive. If you want to go for less and are willing to use mConnect for discovery purposes only then the Zen Stream or the Holo Red are great options. I have had a Zen Stream in a secondary system since May with a Teradak LPS and it has worked flawlessly. Having been familiar with mConnect from the Bridge II it works for what I need it to do and the iFi app has a very good internet radio setup with about a dozen FLAC radio stations including Radio Paradise stations. The Holo Red adds AES and I2S outputs with an internal LPS but still would be reliant on the same third party software as the Zen Stream. I talked to a dealer friend today about the Pulse and he is going to get me a price and delivery date so I may try it against the Aries G1 to see if I see any improvements hardware or software wise. Would also like to try the Red but it would likely just be an experiment. One thing with the Zen Stream is that if you buy new from someplace like Crutchfield or MD you have 60 days to test it.

Most helpful. Keen on the Pulse, but they seem to be trickling out. The Holo Red and Zen Stream are now in my sights. Thanks again.

Yeah, the dealer told me that the parts issues that stopped the Pulsar’s production is now starting to trickle down to the lower models. His best was two weeks before the unit even left the factory. He did say that there were a couple of the larger dealers that might be keeping stock. I would try TMR and maybe Tweak Geek to see what they have on hand. TMR is showing in stock but I found out when I was looking at the Pro-Ject transport that it doesn’t mean physically in stock so I would reach out to Nick or one of the others for confirmation.

The other two are both good alternatives with a good LPS you can get into the ZS for under $550 with the LPS from Jays Audio (LHY) or less with the Teradak. With the Red you’re good to go out of the box.

Because I like streamers including software solutions the Innuos seem very attractive to me. And indeed, no DAC thrown in.

Sorry Jack, the NAD M33 and C658 integrated streaming solutions are not quite cheap. They offer a lot for the money, that is true.
None of these devices ever had issues I had with other brands. They are good quality and the service is really good. From NAD in the Benelux, BluOS to DIRAC, they have been very cooperative when approaching them.

NAD offers a broad range of hardware for low to high budgets. I think that is wonderful.
It offers people with low budget access to good sounding Audio gear, wether it be separates or integrated. Those people can upgrade easily while staying with the same brand.

For me the “cheaper models” offers the opportunity to expand my multi room system, staying with the same concept, but without having to rob a bank. I don’t need “high end” (for my budget) in every room.

Like I said the new model serves a particular purpose and what you are describing for multi room expansion is their purpose much like in the Sonos and Chromecast environments. And yes they do make some higher level products but with higher level prices and parts. However the “famous” Node 2 series is basically the same device they released in 2015 with only changes mandated by parts manufacturers. All of the changes they have made in that device have just now gotten them close to the level of the Aries Mini which was released about the same time. Big difference still is that with the Mini from the beginning you could just add an LPS and with the Node to this day it requires “surgery” to upgrade the cheap internal power supply. It does however serve a purpose but not the end all streamer that the fan boys on Audiogon claim it to be. Like I said I’ve had one in my system twice. Once in a head to head with the Aries Mini seven years ago and then the newest model I bought for my daughter who fits the profile of a typical Node user. It still looked and sounded the same though the software was improved.

As to the new Innuos line they have me curious where the Zenith line did not as I had to interest in internal storage, CD ripping or using the required software before Sense was finally released years after it was promised. That’s why I have stayed with the Aries line for all these years. No DAC and really good software.

I agree on what you said about the BlueSound Node. They were (are) just above Sonos with regards to resolution of streaming and not at Auralic level.

If I were in the market to upgrade the streaming system, Innuos would be the brand. Looking forward to hear how you like it.

They are just a “Swiss Army Knife” for streaming. They don’t do anything great but a lot of things they do ok and the multitude of streaming options make them attractive. They have their place as did the Mini. However Auralic made the mistake of making the upgradeable Mini so attractive at such a low price that it hurt sales of their higher models so they just killed it off. When they did that it left the market monopoly to the Node or the Sonos models. I still have my Mini and it’s LPS boxed up as an emergency back up.

The May KTE.
Send and receive implementation, what ever the type matters.
I2S, USB, SPDIF, AES

Over the last 13 years I’ve had main and office systems, and now have Roon in 11 zones, and have used:

The Bluesound was pretty poor sound quality. Only BluOs and Zuma have AmazonHD. I currently use Innuos with Sense and Roon. Zuma has the most connectivity, are wireless and cost user $500.

As far as I’m concerned, if a streaming system does not have Roon Ready, AirPlay and Spotify, it’s not fit for purpose. Roon Ready can usually be done by a software update. iFi seem to have filled a gap in the market.

I’ve never understood the concept of expensive streamers, they can be done so well so cheaply, I found time spent (and not much money) on clean power pays the most dividends.

I would like to demo an Innuos Pulsar, if they ever become available.

As a newbie to both servers and streaming, this is somewhat overwhelming. What was outstanding about the Aries Mini?

The Aries Mini gave you Auralic’s superb Lightning software/front end. You could stick an SSD in it and it became a networked server. It also contains a DAC and volume control so you could plug it directly into a power amplifier (which I did, a Quad 909). Mine cost me £350 new, with the 909 a high quality system for £850, about $1,000.

It was so good, I sold the full Aries I had in my main system and used the Aries Mini. It is still in use in my son’s apartment.

Also bear in mind that the Aries was launched in 2014 and the Mini in 2015, and as far as I’m concerned solved streaming as I would happily use either of them today. It was also a new brand, formed in 2008 and launched its first product in 2010. So you can hopefully understand why in 2023 I’m sceptical that streaming has anywhere to go other than repackaging and lower prices, and why the time PSA has spent developing streaming products without anything to show is disappointing. I bought my Innuos 3 years ago and was expecting to have a PSA option way back then.

I’ll try my local dealers, Audio Experience may have a Pulse, or University Audio which did have Pulse minis. I think for the long run I’d be happier with the Pulse.

Yes, streamers have been getting coverage on the “DSD MKII - What Streamer” thread as well. The way the MK2 works, I am not sure there is much benefit from the iFi Zen Stream or even the HoloAudio Red – which does have I2S over HDMI though – versus my Raspberry Pi4 running RoipeeeXL. OK, yeah, they can Tidal Connect too. But I have another solution for that. I could see building a new multiroom setup with Innuos. I would start with the Innuos Pulse, with 8GB and its fancy power supply onboard vs. 4GB and the power supply for a small NAS with the Pulse Mini. The price gap is a little hefty though…