I have a brief story to tell you, and a big favor to ask.

Long ago, I bought a used pair of Genesis Technologies III speakers. The seller told me they were made by Arnie Nudell’s son (David?) for an audio show. They certainly look like Gen IIIs & they have official looking plates. However, they have no serial numbers and are finished with an oak veneer, which I don’t believe was a production option.

IIRC, he also said that they were originally assembled with different woofers, but had been retro-fitted with the metal ones when they became available. I don’t know if this was before or after the show. I believe he said that he or a friend of his were personally acquainted with Arnie’s son and got the speakers directly from him. At the time, I was starting a family, so I just hooked them up and have enjoyed them for many years.

However, I’m retired now. I’m also a lot more aware of how much gets lost with the passage of time. I would love to get whatever remains known of these speakers’ story. At the least, verification of the details above would make me a lot more comfortable retelling the story I was given.

And that is the big favor I ask. I know this was many, many years ago and I can understand if you don’t go there anymore. I’d greatly appreciate anything you can share about these speakers, and would be very grateful if you would also send my request to David.

@Paul - I apologize for “shouting”, but am hoping you can help me gather some information on these speakers. I’m (hopefully) adding a couple of pictures! 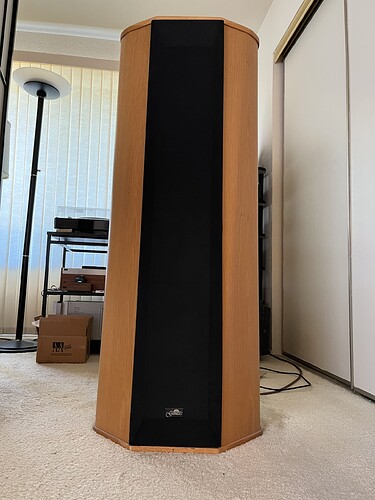 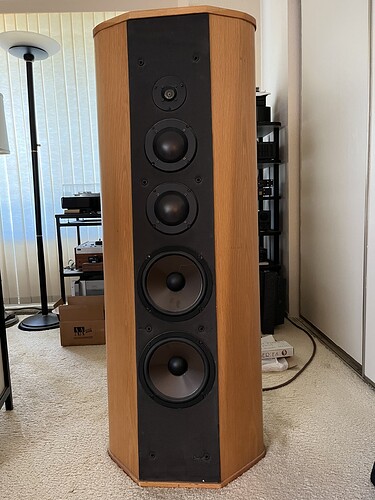 Thanks for your response, @Serhan
I am actually looking for information on this specific pair of speakers, though, which have no serial numbers. See my first post for their back story. In theory, they could be counterfeits, but the unbelievable cabinets seem like they have to be from the original designers. The drivers don’t look like off-the-shelf stuff, either.

What I meant was that sometimes, reviewers, based on their close relationships with designers and manufacturers, they could have historical info on prototypes / proof(s) of concept / show units. These units definitely look posh. Have you connected and tested them to see if the corssovers and drivers are still in good shape?

Thanks, I might try that next. Paul was known to be close with Arnie & may have even been involved with Genesis. Unfortunately, the current Genesis has no records from the original company.

I’ve owned these speakers for a long time - they work fine & sound great! As explained above, I only have the memory of a verbal story as to their provenance. When I got them, the internet was not such a thing. Now, though, I’m hoping to learn more of or at least corroborate the story I have. I’d really like to track down David - I’m assuming he’s the son in the story - but I don’t have the social media interest/skills to figure out how to do that.

E-mail Paul directly as that might get a better response.

Hi @gen3owner . Sorry I missed this earlier. The Gen 3 were a full production product we made though I don’t remember them ever having a wood finish. They were mostly to my memory black. Arnie’s son, David, was our production manager for many years. It is possible he had a hand in them but for the most part, API in Canada made all of our speakers of that era. Once we parted company with API, we first launched the big Gen 1, then the Gen II etc.

They were excellent speakers those IIIs, the biggest we ever made in that tube (the tube was made from paper like a Sonotube cement form).

Thanks so much for your response, @Paul. The lack of serial#s and one-of-a-kind finish mark these as unique. Unfortunately, API was absorbed by Klipsch. Without a contact name, it’s very unlikely that anyone there would help me, even if the old API files still existed.

Can you recommend a polite way that I could contact David directly? I don’t have or want a Facebook identity, but am fine with joining forums such as this one, if there is one he frequents. The sellers told me they got the speakers from him.