The problem we ran into is that the SACD house in Austria does not also do DVD data discs. Which meant that we had to separately produce the DVD disc then hand insert every disc into the SACD jacket, a process that was mind numbingly tedious (Gus did each one by hand).

If we can figure out how to do both and get them prepackaged we’d be happy to go back to that.

@waymanchen11 in general I agree with you - I’m going to play the best version I have. However, one thing I’ve been trying to do for a while but with very little success (without spending extra money) is to sound test different formats (resolutions) of the same recording.

I find it really hard to find a DSD and a PCM of the identical version of a record. Or a 24x96 and 24x192 of the same version without paying twice for it. More often than not when a new hi-res version of an album comes out it is usually a ‘remastering’ meaning it isn’t the same version and therefore not valid for doing comparisons of formats. The Hey Joe download gave me my first real shot at comparing formats without hitting my wallet. I think the only other opportunity in my personal library is Muddy Waters’ Folk Singer which I have the original CD and then the 24x192 digital copy. Everything else tends to be a remastering and twiddling with the sound board dials.

So yes I wholeheartedly agree with you, I’ll play the DSD going forward (probably the digital sourced version), but appreciated the opportunity PSA gave me to experiment listening this time.

The reason I just go to the DSD version is because from the last release (Temporary Circumstances), I tried all the different versions except the 16bit which it didn’t come in, and found DSD is the way to go! There was little doubt it was the best version and closest to top end vinyl in my opinion.

So the vinyl turns up and on the back it says recorded using Gus Skinas Sonoma multitrack. It was then mixed and mastered by some other guys and the 24/96 master was used to transfer to vinyl. 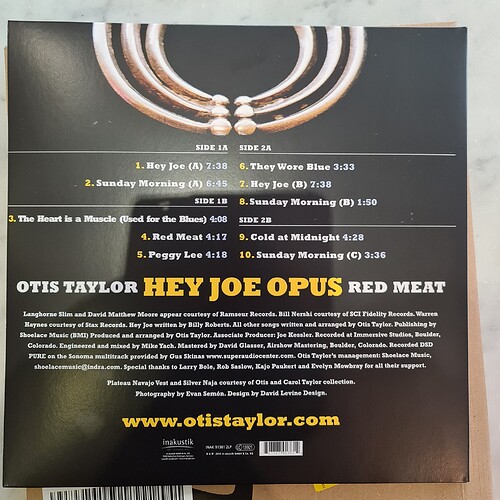 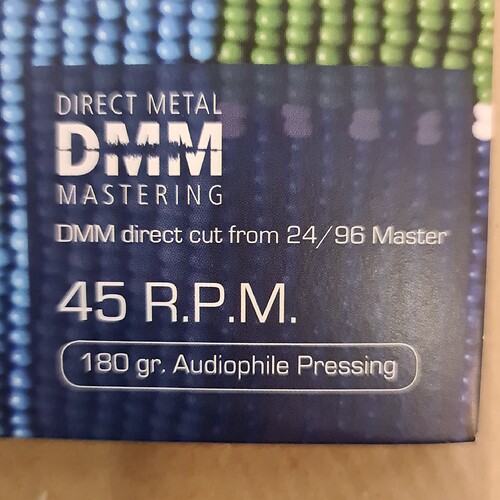 This is a really cool album. The recording is great!

Seems to be alot of bass which I like.

Ordered this Otis Taylor SACD on Nov 18th. It was shipped out on the 19th and here on the 27th, over a week later, it has still not arrived. Even though I paid $7 for shipping, I have a sense that this item was sent USPS Media Mail - the very cheapest way possible. Why is delivery so slow?

I ordered on the 15th and it took until the 25th, 10 full days, to get to me in Indianapolis. Not great, but certainly not horrible. It’s out of PSA’s control, though, unless they want to charge more for premium shipping services, or make less on each sale. Keep in mind they’re not the mass merchandisers other record stores are, let alone something like Amazon.

Been listening off and on for a few days. This is the best release of the three so far, subjectively speaking - in terms of the music. Recording quality is excellent as well.

Interestingly, I am finding that Tracks 11-20 on the SACD [(the “vinyl needle drop to DSD from the original 45 RPM DMM (Direct Metal Master) release”] to be the most enjoyable overall.

The vinyl is very good.

Based on your timeline, I should receive it tomorrow in Ohio. Did not fully comprehend how expensive USPS has become to the little person.

Keep in mind, too, that shipping charges cover more than just the carrier’s rate. There’s the cost of the container, the cost of the printed labels, the act of packing the disc and applying the label, as well as the costs associated with management of the whole shipping process. Not terribly expensive on a unit cost basis, but not free either, plus it’s unreasonable to expect the vendor to provide those goods and services at their bare cost, so a modest markup should be expected. What bothers me is when a vendor treats shipping as a profit center to deliberately boost their bottom line, which some absolutely do.

My copy of Otis Taylor’s Octave SACD showed up this afternoon - nicely recorded. One technical question - with the additional needle drop tracks - the content of the SACD runs to approximately 96 minutes. Correct? Is this usual for an SACD? I have some red book CDs from Bear Family that run 89 minutes rather than the usual 80 - but they’ve been using some algorithm that allows extra time on the CD and of course a Blu-ray disc can hold the complete 14 hours of Solti’s Ring.

The DSD layer of an SACD is similar in length to a CD, IF you have both a stereo section and a multichannel section of the same length. I don’t know how long a stereo only SACD can play. (E.g. perhaps it can only go to 99 minutes…)

I don’t know if it was recorded in multiple formats originally (e.g., analog, 24/96, DSD), but it definitely was recorded in DSD by Gus Skinas. No mention in the liner notes what rate it was recorded at, but the SACD layer in the Octave release is the closest yet to the original.

I should add I got my copy a couple of days ago. Musically, my favorite of the Octave releases. I found the “needle drop” versions less satisfying, like a light blanket thrown over it.

Yes, it was originally recorded on a 32 track Sonoma system at Immersive Studios in Boulder. Immersive was in the same building as was Gus and his SACD mastering center. Gus owned the Sonoma system Immersive used and that same system is now what we at Octave use.

Sonoma can handle only single rate DSD. We are working on building a new system that can handle up to quad DSD and you’ll likely see future Octave releases at that sample rate.

Of the three Octave Records releases so far, the Otis Taylor, Hey Joe | Red Meat, is my favorite. Temporary Circumstances was a very pleasant listen and the recording itself, most incredible. However, Otis Taylor’s record had me hopping in my seat and really getting into the music. Maybe I was just in the mood to hear some blues, but I really loved it! I especially liked the smooth transitions from one song to the next. It seemed like the first 10 tracks were a single opus to, as Otis himself said, our actions and their outcomes. Please keep this quality of music coming! One question though, exactly was is meant by “needle drop to DSD”?

A needle drop is recording an album played on a turntable to a digital recording device.

A needle drop is recording an album played on a turntable to a digital recording device.

That’s what I figured, but because of the great number of variables that are associated with LP playback, I was surprised there wasn’t information offered about the equipment used (what turntable, tone arm, cartridge, etc., not to mention setup data). All of that can dramatically color the sound of the reproduction. Or if it was there in the provided notes, I missed it.