Please be safe in Boulder, CO

At this moment, there is an active shooter in Boulder. I so hope that all your families are safe there.

I hope all the PS Audio family is safe in Boulder.

I imagine that this is the one time that I can speak for all of us in hoping that you, your family and friends, and of course Team PSA are safe and sound during this trying time. You’ve brought us all so much joy over the years. We are all sending you our best thoughts.

Having worked for a Boulder based company, going there every month, I love, have nothing but sweet memories of Boulder. Hoping for a quick end to the misery including the mental illness of the perp.

Stay home, crank up the music. Be safe.

It saddens me that this never seems to end. Lose yourself in some good music. THAT is a safe place.

Hope you are safe down there.

They got the guy, and apparently it was just one guy, so they’re saying things are safe. Usually it is one of the safer towns in CO - or the country, for that matter. When I moved here 2.5 years ago, it was one of my two groceries and was my pharmacy. The Chase bank and liquor store across the parking lot were frequented. Calord has been shopping there since 1976, and lives in the neighborhood.

A reporter interviewed a woman who went there to shop this afternoon, and then on a whim decided to go get an ice cream beforehand. When she came out, she heard the sirens. So - the moral is: ice cream can save your life.

Of course, the next time you get ice cream, you could get run over by a bus.

So the real moral is - every little thing you do is important.

I wake up to this bad news … my thoughts are with the bereaved families. Headlines from our country … We reopen the whole country when everyone over 50 is vaccinated. The wild Danish vaccine is ready at the end of the year …

Terrible news. Just hope some good comes from a tragedy like this.

May those who lost their lives rest in peace! Sincere condolences and thoughts go to their beloved ones and to the community.

Thanks, everyone. As far as we know everyone at PS is safe. Can’t say the same for the community.

Only in America. It’s sadly to the point that unless it’s more than a few people shot it no longer makes news.

Thanks. Not sure what good news could come from this but appreciate the thought. One starts to imagine we’d think about gun control but sadly that never happens. In fact, for every mass shooting gun sales go up. It’s nuts. Our country’s nuts.

The pandemic was the only respite from gun violence this country has known. There was a 10 year low in mass shootings because of CoViD.

Since the first of this new year we’re back on track. 7 mass shootings since January first.

And lest we not forget, a mass shooting is 4 or more shot not including the gunman. Thus, a mere three people shot doesn’t even make the news.

I guess it depends on the classification but CNN says 7 mass shootings in just last 7 days. Either way, very messed up. Prayers to affected families. Hopefully this results in change. Different political climate so maybe. 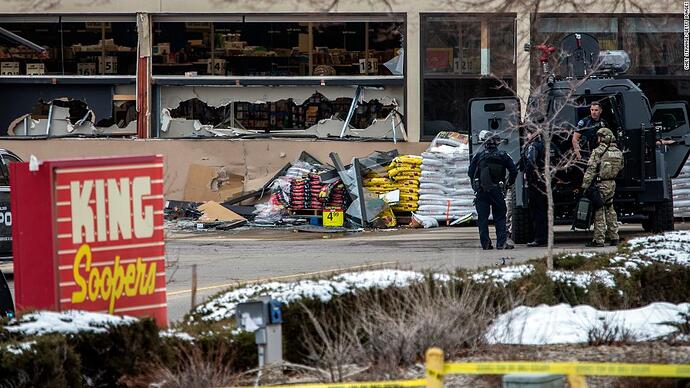 CNN defines a mass shooting as: a shooting incident which results in four or more casualties (dead or wounded) excluding the shooter(s).

I wouldn’t hold my breath. It doesn’t seem to matter to people in this country.

This probably is not the tipping event, I agree. But it will happen. Just as racial inequitable treatment eventually reached a tipping point with the George Floyd case.

Unfortunately it will probably need to be a bigger headline grabber before anything changes. If Parkland or Vegas occurred in present climate, God forbid, it might change things. Parkland was nearly the tipping point (got so close with the great youth activism that followed) even in a much less receptive climate.

Edit: maybe it isn’t really about numbers, but about emotions and a “can you identify” moment? With George Floyd it took a video and just the brazeness of it all, and the world finally said enough is enough… Maybe in a place like a supermarket where likely tons of cameras, maybe if there is something in the footage that can enrage/awaken/trigger/ a response from the public as a whole, maybe this could be the one. It will take that “connecting” moment. With prevalence of phone recorders and video cameras, it’s a matter of time.

Edit II: Sorry, this isn’t audio. But it’s a hell of a lot more important than audio.