Speakers to hold on to regardless

I have a 24 year old pair of Hales Transcendence 5 speakers which I have modded the crossovers with high end parts and I replaced the stock tweeters with Seas Millennium tweeters. I just a year and a half ago had the speakers looked at by a technician who after some repair and tightening measured the speakers and they are still very well matched to each other. Although the speakers might be worth $1500 on the used market they would cost at least ten times that to replace with new speakers with same quality and sound. My Hales T5’s are the only component I cannot see myself upgrading as they are quite nice as is. Any one else find themselves in this pleasant situation?

Genesis V, original version. Sound wonderful when driven by tubes. I know the clock is ticking on these speakers, especially with regards to the 400 wpc class AB servo amplifier. New they were $16,000, the current version is $40,000. Mine on the used market might fetch $4-5k.

I prefer the look of mine in Brazilian rosewood versus the new “look”.

My office desktop speakers are ProAc Tablette Signatures. I bought them with the intention that they would be forever speakers. So far so great. I’ve had them for three years and haven’t regretted getting them once.

Nola KO’s, in fact the actual pair introduced at RMAF in 2012 serial #'s 001 & 002. When the driver manufacturer made changes to the midrange and tweeter drivers that required a complete crossover re-make they became Series 2 with a significant price increase. Bought the show pair from Carl at that time, Now at Series 3 with little to no change the price has well over doubled. Easy to drive and easy to place with their partial open baffle design.

I had a pair of Genesis 3s (no NOT the Paul Mc. Genesis) : but these: HUMAN Speakers: Genesis Model 3 and 3+

Great sound. I gave 'em to my son after I’d used them for some 20 years, but the heat of southern Idaho dried up the surrounds.

Genesis speakers had more technical information printed on their cartons than some speakers had in their owner’s manuals! 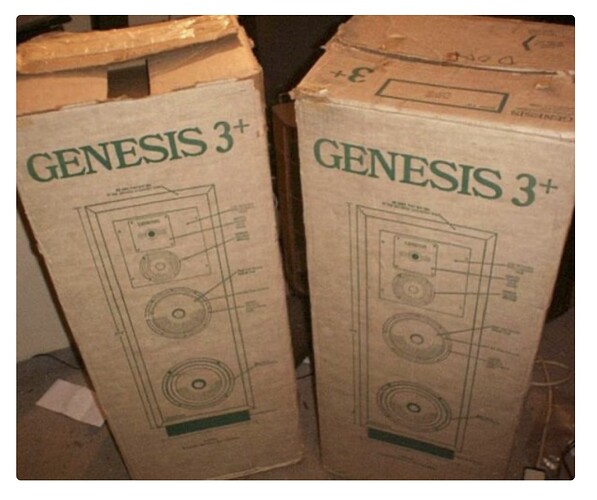 I still have my boxes!

I kind of feel this way about my TAD CR1 speakers. Of course I’m super tempted by the PS Audio speakers, and someday hope to hear and maybe own them, but I don’t think I could get rid of the CR1’s.

Von Schweikert VR4-jr’s. I bought them when they came out almost 20 years ago, and they are still going strong. I don’t have space for large speakers in my room and these provide exceptional sound quality. They are very neutral and revealing (with certain equipment they might be a tad bright), but they sound superb with my tubed BHK preamp and BHK 250. 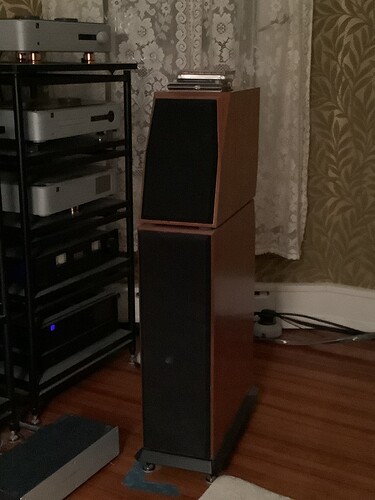 The speakers in my main two-channel system are Thiel 2.2 floorstanders. They are “only” 31 years old, and I hope they keep singing on for many years more. They are sweet, clear, natural, and able to image like crazy. The 2.2s sound great with a bit of tube magic supplied by a BHK preamp. It would cost a lot of money to obtain anything that sounds nearly as good today. Unfortunately, Thiel Audio no longer exists, and there are few current speakers that can supply the holographic imaging associated with first-order crossovers and time/phase coherence.

Talking about time and phase coherence, I still have a pair of Sequerra Pyramid Met 7s that I bought new approximately 40 years ago. I have not played them in quite awhile but they are still on a shelf in a downstairs studio and sounded great last time I listened to them. Imaging was superb. I had bought a RH passive subwoofer (and crossover) with them but it went a long time ago. I doubt I will ever let the Met 7s go.

Had a pair of Met 7’s with the subs, ideal for apartment life, when i was apartment hopping. Sold them many moons ago. Fine sounding speaker, and a steal, I believe the Met 7’s were $275 the pair.

They still look great. That’s a feat for floor standers.

My previous speakers to my focal were VR-4 III HSE. I had for 17 years. Even after that long I had a line of people wanting to buy them. Albert made some great stuff.

I remember the first time I heard these speakers and being impressed with how open and transparent they were.

funny… I’ve got Hales Revelation 3s and have a similar issue… I don’t know what I’d have to spend to get a meaningful improvement.

Infinity Modulus Loudspeaker System, 32+ years.
2 way bookshelf speakers plus 250 watt powered subwoofer with servo. The system also included an external crossover box that is inserted between the pre and power amps with line level inputs/outputs (rca only). Subwoofer could be placed near the front wall while the 2-way speakers on Infinity Modulus stands were free to be located away from the walls.
They sound great with both full tube pre and power amps, and with BHK Pre & M1200 monoblocks. The subwoofer has foam surrounds and has been re-foamed. The emit-k tweeters still sound great after 32 years. The rubber surround on the small woofers are still in great condition. My newer Sonist Audio speakers have more magic, but the old Infinity speakers are remarkably clean and uncolored sounding and have great imaging abilities, especially with the BHK pre & M1200 combo. Have attached a photo of the 2-way bookshelf that I’ve previously uploaded in another thread. (In this photo the speaker is close to the wall when not listening to music)

Had a pair and for whatever reason a pair of 2CE Signatures with a pair of 2WQ’s worked better. Treo CT’s were a no go though.

2CE Signatures with a pair of 2WQ’s worked better

I assume it was the crossover of the passive radiator on the 3As. It creates a weird bump when trying to pair subs. Before replacing the 3As in the main system I went and listened to some newer Vandersteens… Oh My! Did they require good electronics. The shop I went to should just give-up trying to sell them. Very picky set of speakers with very particular set-up of amp and line level inputs. You’ll be rewarded but you’ve got to be invested. I was not so invested

Maybe some day I’ll go back though.

I’m not sure if it was the crossover point or that they needed more “breathing room” than I could provide, The 2CE Sigs just locked into the room for whatever reason. The numbered Vandersteen’s liked a certain voicing of amps and in the SS realm I found Belles and Odyssey to be the best match, With the Treo’s never could find a match so after a year gave up and moved on to Nola. I’ve thought about going back and even considered buying a pair of the newest 2CE’s but just didn’t and now the price has gone up almost 50% in a year.

I have a pair of Thiel 3.0s that are 35+ years old. They were the first pair of Thiels I ever heard back in the 80s. I heard them at a co-worker’s house. I liked them so much that I eventually bought a pair of CS3.5s that I later sold and bought a pair of 3.6s. A few years later, after I purchased the 3.6s, the co-worker decided he wanted a home theater and gave me the 3.0s. I eventually took a break from high end audio for a few years but kept my equipment, which included the 3.0s and 3.6s. I eventually got back into high-end audio but had to downsize my living arrangement and ended up with a small audio room. I sold the 3.6s thinking they were 20 years old and probably didn’t have a lot of life left in them, which was a big mistake. They were near mint and meticulously cared for. I play the 3.0s occasionally to re-experience the Thiel sound because I still haven’t found anything that I like better.